Skenea wesselinghi spec. nov., a new fossil species of Skeneidae, recorded from the provinces of Zeeland, The Netherlands, and Oost-Vlaanderen, Belgium, is described and compared with similar taxa. According to palaeontological context its occurrence could be assigned to the Pliocene.

Moelleria jansseni spec. nov. and Skeneopsoides dejongi gen. et spec. nov., two new fossil axially ribbed skeneiform species from the department of Manche, France, and the provinces of Zeeland, The Netherlands, and Oost-Vlaanderen, Belgium, are described and compared with similar taxa. According to stratigraphical information of the excavations in France and Belgium, the palaeontological age could be assigned to respectively Pleistocene and Pliocene.

Two new species of Eurytrochus that occur sympatrically and syntopically in turbid coastal waters across northern Australia are described in this paper. Two additional conchological characters – apertural lirae and lamellate microsculpture – are added to the suite of characters used to circumscribe this numerically small, apparently monophyletic, Indo-Pacific genus. Whilst both new species possess a high degree of intraspecific variation – in shell shape and sculpture, both ontogenetically and intraspecifically – one of them is remarkable for the rapid and irreversible change of shell colour that takes place from the living state to the post-mortem state on exposure to sunlight, and the other has a hyperdiverse colour pattern. Besides the naming of these two new species, two taxonomic acts undertaken previously within the genus are upheld here; firstly Cernohorsky’s (1987) formal synonymy of Gibbula affinis var. cognata Pilsbry, 1903 under G. affinis Garrett, 1872 is supported, and secondly the (hitherto informal) synonymy of G. dacostana Preston, 1909 under E. strangei (A. Adams, 1853) is confirmed and formalised.

The tropical Indo-Pacific Turbo petholatus Linnaeus, 1758 is the type species of the genus Turbo. Its anatomical features are not completely known. As anatomical detail is important for the generic definition and differentiation from closely related taxa (such as Lunella), a detailed account of external and internal morphology of the species is provided. Additionally, anatomical information is also given for two subspecies of Turbo from South Africa ‒ T. cidaris cidaris (Gmelin, 1791) and T. cidaris natalensis (F. Krauss, 1848) ‒ in order to add new morphological data for Turbo. The anatomical information is discussed in a comparative and taxonomic context, concluding that a set of new features can be added to the Turbo taxonomic definition, such as the posterior end of the epipodium surrounding the posterior region of the opercular pad, the presence of a pseudoproboscis, and the presence of a secondary membrane attaching the rachidian to the radular ribbon.

DEKKER, H. An overview of the living species of Angaria (Vetigastropoda, Trochoidea, Angariidae), with description of two new species

Until a few decades ago, the genus Angaria has been known from only two species, A. delphinus and A. sphaerula, sometimes with a few forms recognized. The last decennia a more thorough study of this genus has revealed that a number of previously described species deserved species status and quite a number of additional new species have been described. This paper aims to summarize the available information, which results in the recognition of 23 valid species, living exclusively in the Indo-West Pacific. Two new species are described from the Philippines, A. maitim spec. nov. and A. putong spec. nov. A neotype is designated for the nearly forgotten Australian species A. incisa (Reeve, 1842). It is demonstrated that the valid name for the species known as Angaria nodosa (Reeve, 1842) is the senior Angaria exasperata (Dillwyn, 1817). Several not named forms or species are briefly mentioned at the end. 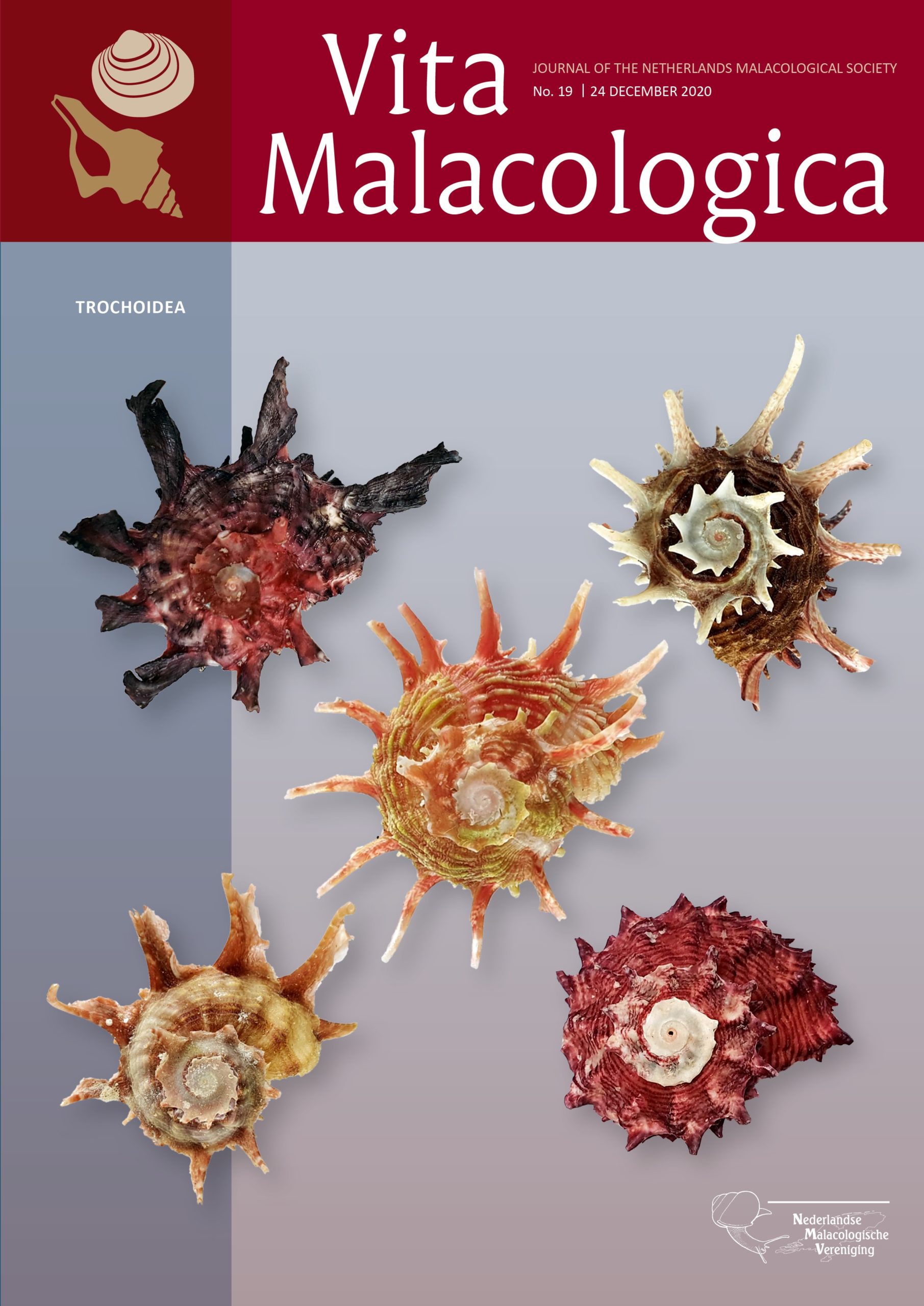